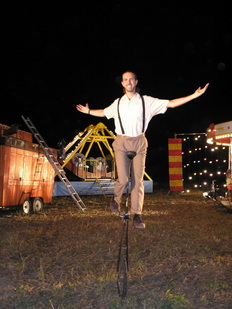 There are 3 main individual events at the World Unicycling Conventions (UNICONs). They are:
I have been the world champion in racing (twice) and in Freestlyle (once). In Standard Skills I got 4 silver medals (for less than a point). 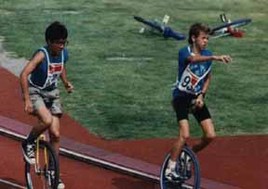 Racing in Japan (1987)
Racing:
International racing events include: 100mts, 400mts, 1,500mts, 50mts with one foot, 30mts wheel walk, slow forward and slow backwards. The best times on every age group compete together for the final (expert) heat. The winner of the final heat will get points. Whoever gets the most points in the expert heat becomes the Racing World Champion. 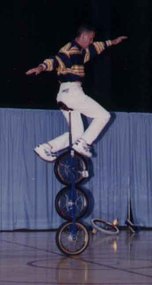 Freestyle routine in 1992
Individual Freestyle:
The freestyle competition is based on difficulty of the tricks and presentation. In Unicon V (1991) I became the Freestyle World Champion (a very close call after Jose Roman). 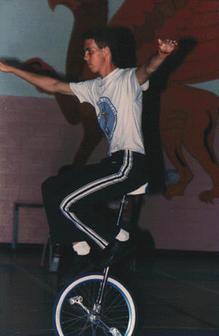 Standard Skills in 1991
Standard Skills:
In Standard Skills we submit a list of tricks and performed.  The more difficult the trick, the more points are awarded.
There are 2 sets of judges, one makes sure all the tricks on the list are performed (in order to give the points), and the other one check points out for imperfections. The winner is the one with the most points at the end.

I never got to win Standard Skills (in the expert category) but I got a close second (for less than a point) for 3 championships in a row. 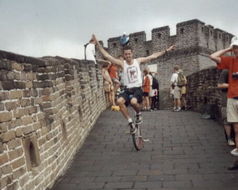 Shortly after Unicon X, that was held on Beijing, China, we unicycled on the Chinese Wall.  It was quite an experience. 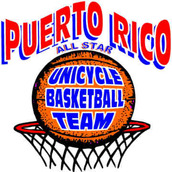 Am a proud member of the Puerto Rico "All Star" Unicycle Basketball Team. We are 10 times World Champions. Since our first international tournament in 1984 to 2008, we only lost 2 games!